Through the Designer's Notes, Part 1

If you have been playing Through the Ages for a while, I suppose you got used to that mix of leaders and wonders in the game. But there was probably a moment when some of you asked yourself - how the designer picked those wonders. And especially - why just those people as leaders? Such an experienced designer sure had very good reasons, right? Or, are we missing something here?

This text might help you to understand what's behind that

What is important to realize - Through the Ages was not created by an experienced designer. And it was actually not even created "for publishing". Back then, I was designing various board games without any plan, just because I loved to, and then, I was playing them with my friends. I was actually quite surprised when a friend of mine who happened to be a hobby games publisher said about one of them (Arena): "This is good, I would publish it".

One of these old games was an epic Civilization-themed game. No, it was not Through the Ages and the mechanics were different - there were big territory cards (with tiny cattle, wheat, iron or coal icons), players were competing for them and put little people tokens on that icons, there were wooden houses (for labs, temples or libraries) etc. But there was also some familiar stuff - four Ages, four types of units, science points to unlock new techs, cultural points that served as victory points, events that messed with the game, and more. And especially, there was a set of 24 great persons, six per age. When an age ended, you picked one of them secretly and used them later for a strong one-time effect.

When creating that game, I just picked random historical figures that came to my mind. You know, I didn't even know whether the game will work. But I toyed with everything back then and wanted my prototypes to look nice. And since it was impossible to find pictures of all those persons in a similar style, I have just personally drawn a picture for each one.

Well, it was so many years ago I think I didn't even have my own camera back then, so I have no pictures of that game. But I was digging deep in my old prototype boxes, found the cards and took a picture for you - as you can see, I am not kidding, you probably recognize most of those people... Sorry for the texts, this prototype never existed in other than the Czech language. But at least, you can realize how old these cards are - they come from the era when using Comic Sans was not listed amongst mortal sins! 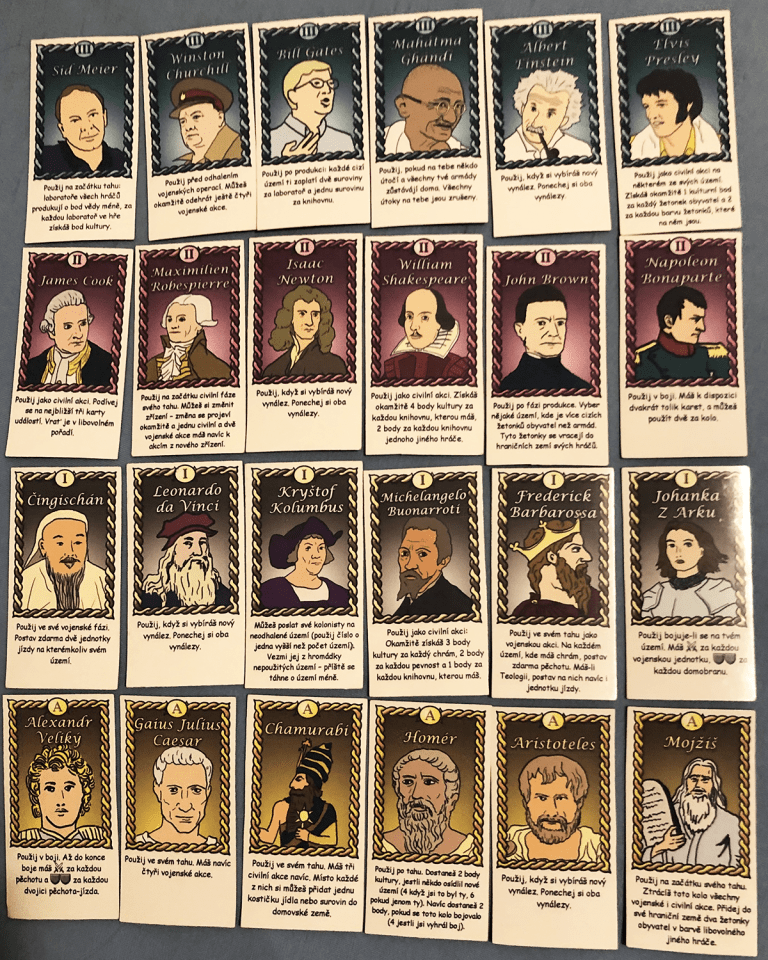 Anyway, the game worked quite well, my friends loved it, but I was a bit unhappy with one or two parts of it. Several years later, I returned to it with fresh ideas - but instead of just replacing the problematic parts, I have built a completely new game around those new ideas. The one you know as Through the Ages now.

Well, the truth is, neither that new game was created with publishing in my mind. I was just not thinking that way, I had my job I loved (doing videogames) and creating board games was just a very passionate hobby, that only rarely ended with a publishing agreement for the local market.

So when I was looking for some great historical figures to test those new ideas on, I didn't hesitate - I already had a set of 24 hand-drawn portraits .

Well, I used only 23. One of the original ones was created specially for a particular mechanic of the first game (freeing the slaves), thus I had to pick another one. So, this is also a story of why Johann Sebastian Bach was the only leader without a portrait in the early prototypes of Through the Ages

Thus that random pick from many-many-years-ago made it also to another game many-years-ago. I wrote some mechanics for these personalities, my friends and I started to playtest with them... and when we started to love the game to the point when we were considering publishing it, we already got so used to them (and had their abilities relatively well balanced), so no-one questioned the selection.

It would be sure different today - someone would probably notice shameful lack of female leaders and strong dominance of western culture amongst the selection, but well, political correctness was not a thing here in Czech back then, and we were producing and publishing our first BIG game, so we had lots of other issues to solve. And also - for us, games were always first and foremost about gameplay.

So, be sure there were no hidden intentions behind the selection of the leaders for the game. There was just a young geek who sat down to his computer one evening around the end of the millennium, trying to recall 24 historical figures he remembered from the history lessons he had at school, to spice up a civilization-like game he was creating for his friends.

Back to Blog Next Part